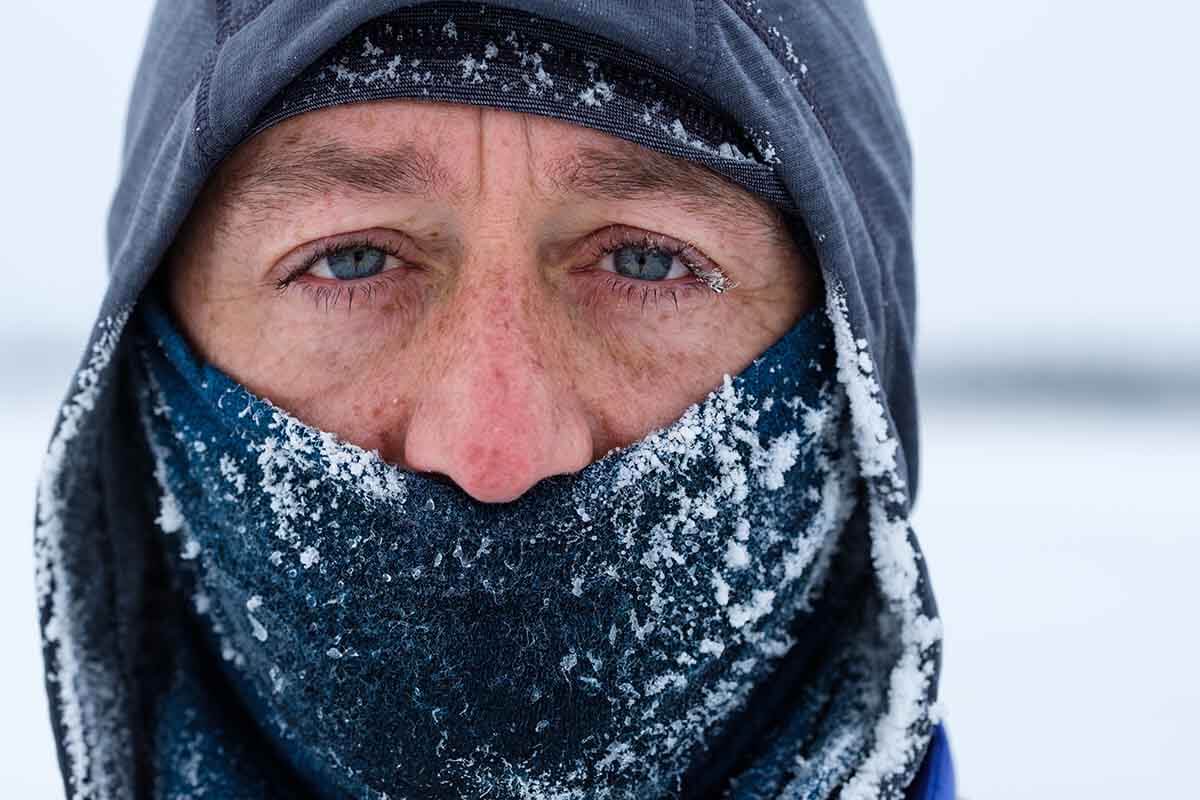 The 6633 Arctic Ultra isn’t a race for the faint-hearted. The 380-mile race crosses the line of the Arctic Circle. It is regarded by many as the toughest, coldest, windiest ultra distance footrace on the planet. Three-quarters of people who start the race don’t finish. Mark Whittle and Hayley White are two people that did. The pair from the UK left their bodies and souls out on the course. But it was worth it. Exhausted, they finished joint-fifth on their first and probably only attempt at the race. Find out how Mark and Hayley prepared for the challenge, what went through their minds during the race and the emotion as they crossed the finish line after nine days of running.

What made you want to take on the 6633 Arctic Ultra?

Mark (M): Honestly, I’m not 100% sure why I chose the 6633 Arctic Ultra, but I do know that after many years in the triathlon world I needed a different challenge. I considered doing a double or triple IRONMAN, but even that wasn’t enough. I needed something that really scares me and takes me out of comfort zone, and the 6633 really scared the crap out of me!

Hayley (H): I heard about the 6633 through Jonny, a medic and race organiser of TrailMed. I had barely finished Deadwater and he turned to me and said, ‘I know of a race you would love.’ Barely three weeks after Deadwater, I Googled the 6633 and registered that day.

What is your background in the sport?

(M): I played football and rugby as a child and on joining the Royal Air Force I played every sport imaginable. In 1999, I did my first triathlon and I was hooked on triathlon and IRONMAN from that point onwards. I’ve completed several IRONMAN triathlons and represented GB at age-group level multiple times.

(H): As a chronic asthmatic from three-years-old, I took part in little to no exercise. I always fancied taking part but it always ended in me keeling over with an attack. It wasn’t until I was 17 yrs old that I joined a gym and took part in my first step class. After six months, I attempted a jog. In 1996, I completed my first marathon in London and I haven’t looked back. I have done multiple marathons, Ultras and an IRONMAN. 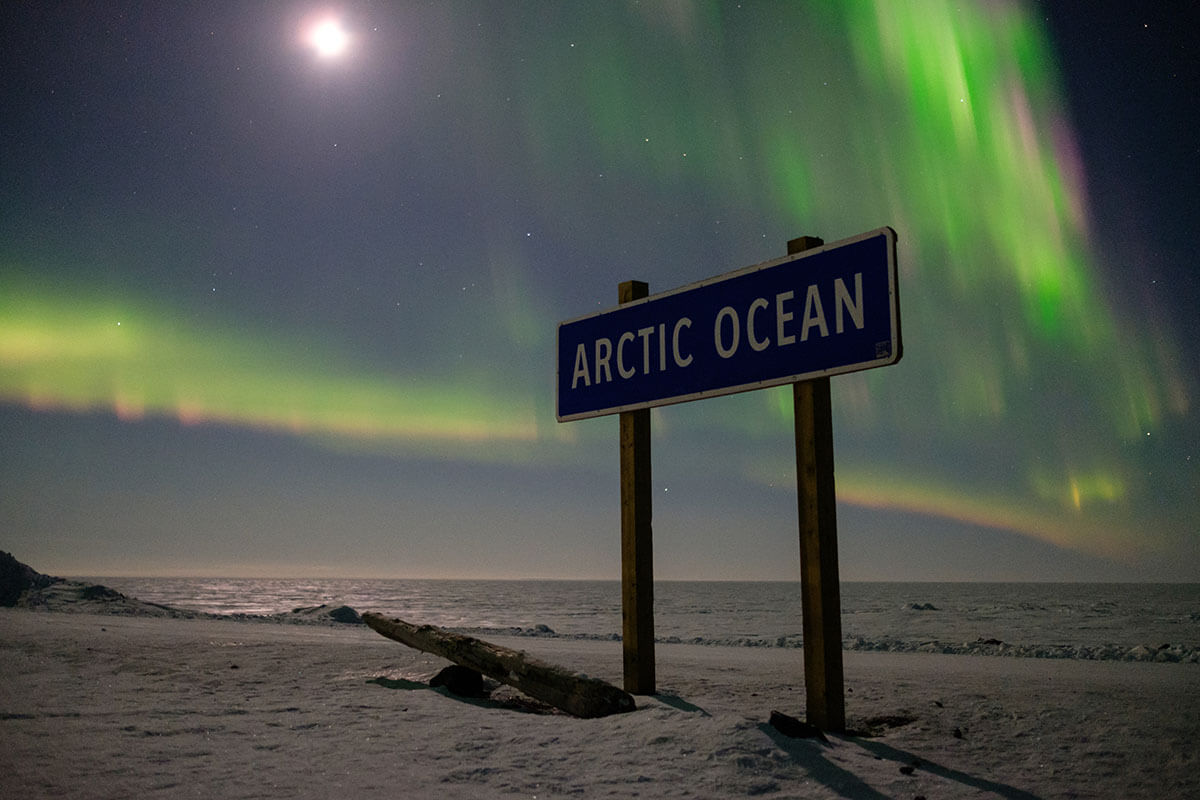 What were the most extreme conditions you faced during the race?

(M): The temperatures dropped to a reported temperature of -32’c about halfway through the race. That was pretty chilly! We got blasted one day with very strong winds, I don’t know the speed, but that day was a head down, grinding kind of day.

(H): The temperatures for sure. It was how quickly you became cold and almost unfunctional with your hands. Once you lose the function of your hands, you’re in dangerous territory. You have to respect the environment.

How did you prepare for the race?

(M): Preparing for a race that has such extremes of temperature is quite difficult in the UK. I didn’t have access to an industrial freezer, so the majority of my training time was fitness and mental training, and practising my systems (sleep, clothing and equipment). I spent a lot of time training. With such a high ‘DNF’ (Did Not Finish) rate for this race, I knew I didn’t want to do something silly and put my race in danger in the early stages of the race.

(H): I’m being totally honest; once I knew I was in, I had a new focus on my training and preparation. I love all the preparation of kit, training programme design, etc. I foolishly thought I would just keep upping my game. Looking into the DNF rate and doing some thorough research after the training weekend in November 2018, it was then that I realised I needed to have way more respect for the extreme conditions. I changed my prep and knew that, while I was confident in my physical fitness and mental strength, nothing was guaranteed.

What kit and equipment did you have and how did you choose it?

(M): With such extremes of temperature, your choice of clothing and equipment is vital. We were lucky that the race director owns an excellent local outdoor shop called Likeys, so we received excellent advice and guidance on the choices available and the pros and cons of all the options. I used the HOKA ONE ONE Speedgoat MID, tested it thoroughly in the UK and it worked really, really well in the Yukon.

(H): The training weekend last November at Brecon Beacons was the perfect opportunity to question and research kit. However, certain brands of kit I always have because I trust and love them. I have worn different models and specifications of HOKA. I have worn them throughout training over the last four years and more specifically for the Sahara (Marathon de Sables). I chose HOKA Speedgoat for the Arctic. 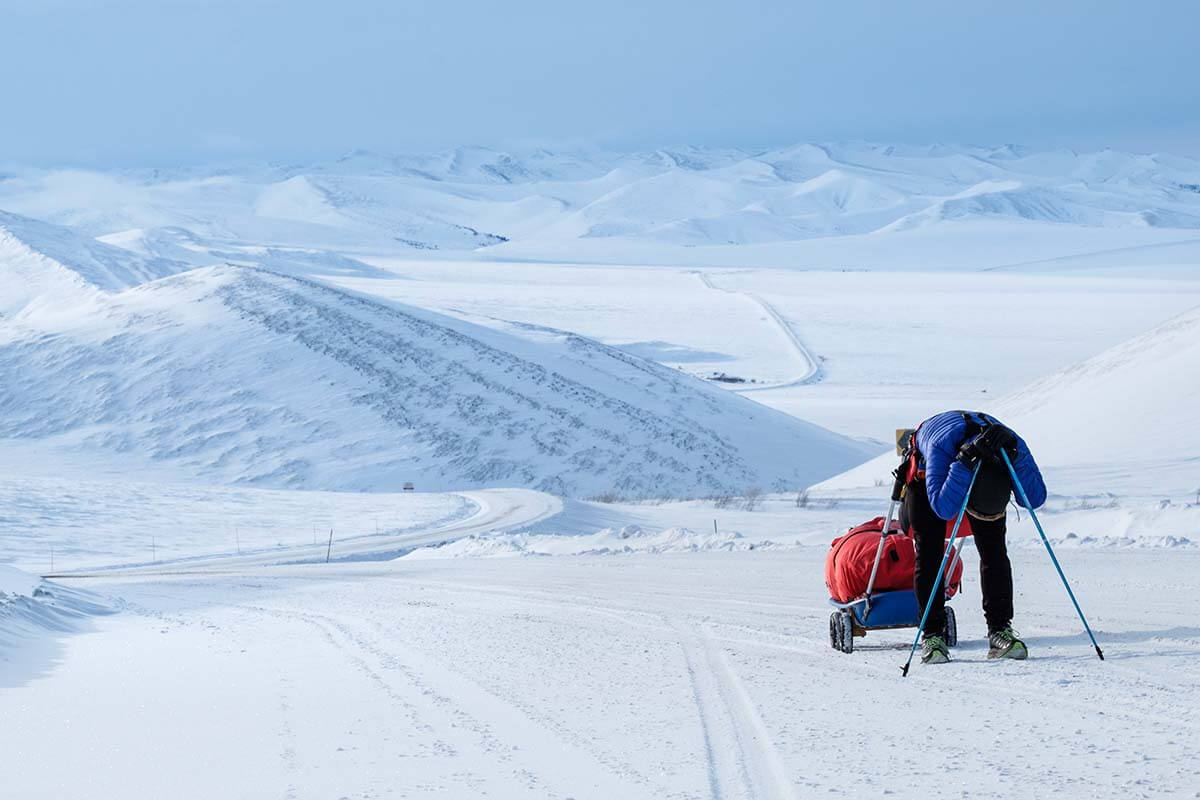 How did you stay focused during the race?

(M): The mental game was key during the race. With fatigue and lack of sleep, and knowing you had hundreds of miles left to cover, you had to stay focused and just concentrate on the immediate task at hand. Thinking too far ahead was foolish, so breaking it down into smaller chunks was the key.

(H): The mental strength needed for this race is beyond explanation. I have had to dig deep in many ultras but this was one huge emotional rollercoaster.  Preparation is key. Knowing your systems and kit and having good solid physical fitness is a given. You then need to want to cross that finish line come what may.

How did you factor in eating and sleeping?

(M): We decided we would have a break every two hours and stop for 15 minutes to either have some food, a snack or some hot drinks. This worked really well as we could break up the race into smaller chunks and keep focused. For sleep, we just stopped when we needed it, but it was mainly just a quick hour sleep on the ice, then get going again. There were quite tight cut-offs during the race, so we didn’t have the luxury of sleeping lots. In fact, I had 19 hours sleep in 9 days of racing.

(H): During my training I had practised a few different systems of eat and sleep (rest) as I wasn’t confident one system would work. I didn’t want to go with just one either. Mark and I had both done the two hours on, 15 minutes rest approach.  It worked a treat. In hindsight, I would tell anyone training for this to do that too.

What was the biggest challenge you overcame to complete the race?

(M): For me, it wasn’t the tiredness, the hallucinations or the aching muscles. I had stomach issues halfway through the race which really drained me. At that point I thought my whole race might be over.

(H): The extreme cold makes everything so much harder and slower. I couldn’t help thinking how much quicker completing say 20 miles would be if we could run. But you can’t. So I found it incredibly frustrating the time it took to complete the distances. 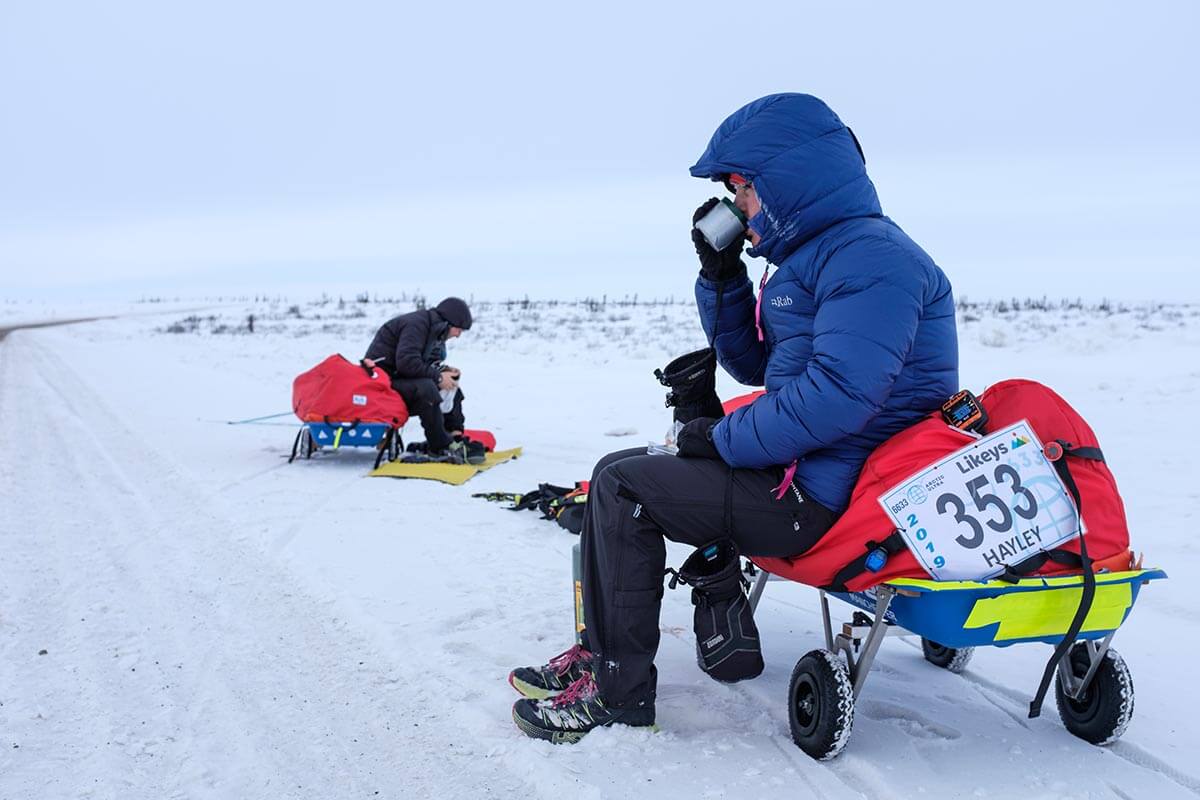 Did you run the race together and intend to finish together?

(M): Yes and no. We did do the whole race together but it wasn’t pre-planned. Maybe after a day together, we agreed it would be more beneficial if we stayed together – and we were proved correct.

(H): It certainly wasn’t planned that way. But in fact, it worked a treat.  We both had issues that arose during the race and, being together, it was definitely a case of two heads better thinking it through than one!

How important was it to have somebody close by during the race?

(M): Very important! When one of us was struggling, the other one would pull them through. There were so many times when teamwork was the only way we got past a certain obstacle. I have no doubt it would have been a totally different race if we hadn’t been side by side.

(H): Teamwork definitely made the Whittle and White dream work.  I don’t want to think about what might have happened had we not been there for each other.

How did you feel crossing the finish line?

(M): I was very, very pleased, but totally drained. I was expecting it to be quite emotional on crossing the finish line, maybe even a few tears, but it wasn’t like that at all. Perhaps the emotional rollercoaster that we’d been on over the previous nine days had taken all the emotion out of it and we were just getting the job done. Or maybe I was just too damn tired. Don’t get me wrong, it was amazing. There just wasn’t any emotion left to come out.

(H): I had spent so much time mentally visualising crossing that finish line both before the race and during. In fact, doing so during the race pulled me through some very tough times.  I had anticipated a huge emotional finish. However, I think the relief and sheer exhaustion meant I had no emotion left. I had crossed that finish line. Job done.

Do you plan to do it again?

Would you recommend the race?

(M): I would, but the bottom line with the 6633 Arctic Ultra is that it gobbles you up and spits you out. The commitment required is massive, you have to go deep, deeper than you thought possible, and if you’re prepared to leave part of your soul out on the ice, then you just might succeed.

(H): I would, but boy do you need to do your homework. You need to be fit and exceptionally mentally strong. You have to prepare in every way with your kit. Know everything inside out and more. Things will go wrong and you need to be able to adapt and quickly.

Where do you go from here having completed the world’s toughest race?

(M): A lot of people are asking, ‘what’s next?’ I guess that’s a normal question when you’ve done something big. My usual response to that is: a rest, spend time with the family and pay off my credit card bills. A few people have suggested some races and crazy adventures, but for right now, I’m happy spending a bit more time at home and letting my body and mind recover a bit.

(H): I don’t know to be honest.  I am just enjoying being back with my family and back to running again. My body and mind needs a rest.