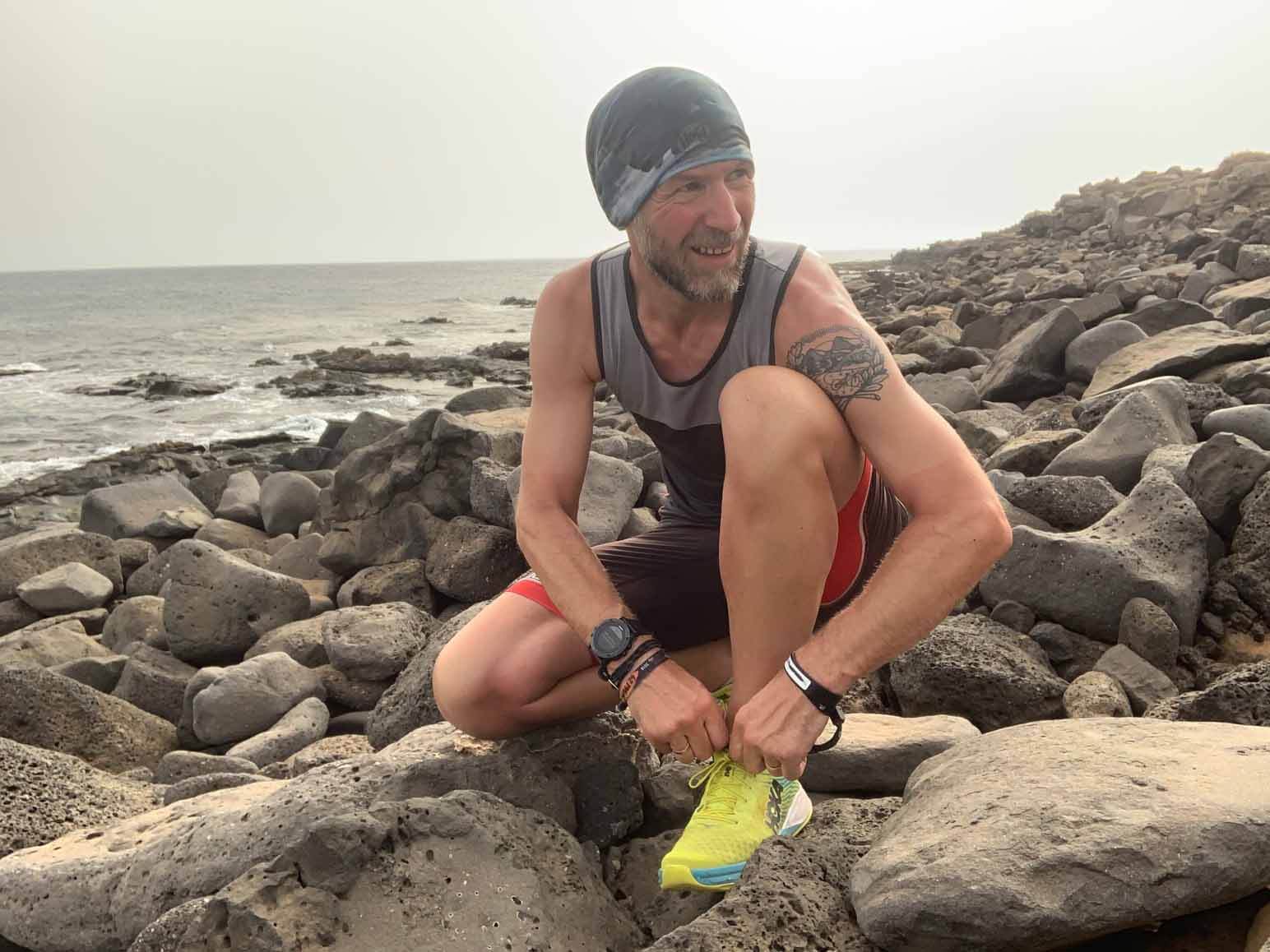 Tom Pullinger aka Inspired Runner was inactive and seriously unfit. He smoked frequently and was reliant on his inhaler to get him through the day. One day, inspired by his long-distance running father, Tom stopped smoking and took up running in an attempt to lead a healthier lifestyle and be a better role model to his family. From short runs to marathons to IRONMAN, Tom challenged his personal limits and succeeded, with his father by his side every step of the way.

As a teenager, I used to watch from my bedroom window as my dad set off for his regular runs. As soon as he was out of sight, I’d be round the back of the house, smoking.

My dad’s marathon training was regular as clockwork, an hour or two in the evenings and two to three hours on Sunday mornings. Every cigarette I smoked was preceded by and followed by a couple of puffs from my asthma inhaler. 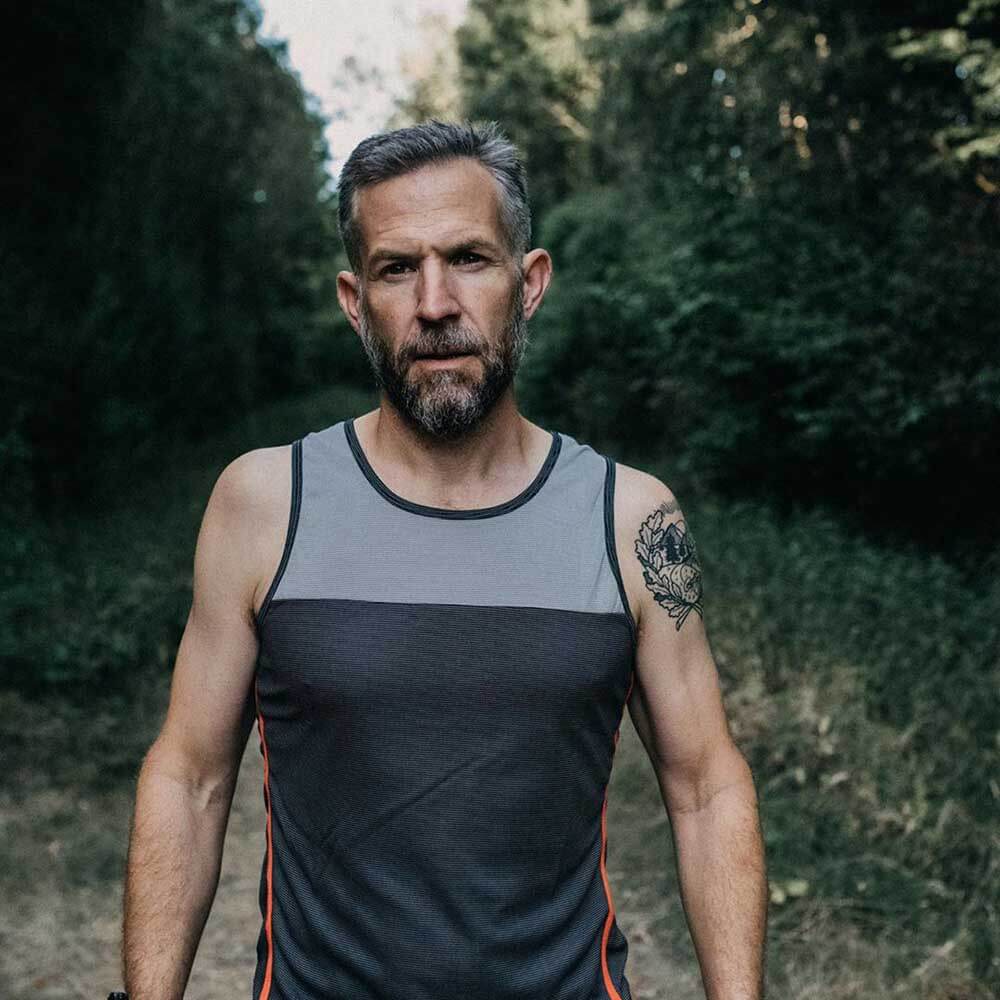 My asthma was really severe. If I had so much as a laughing fit, it would end in me frantically searching for Ventolin. I was using so many inhalers that I would routinely tell my doctor I’d lost another one so that he’d give me another. In reality, I was getting through inhalers at an alarming rate.

This carried on through my twenties. I wasn’t active at all. I worked, I played video games and I smoked.

Every year, we would go as a family to watch my dad run the London Marathon. Every year, I’d vow to stop smoking. At age 26, my wife and I were married, and as I hit 29, we decided to start a family.

The time was right to stop smoking. At the same time, I started running. Those first tentative steps were terrifying. I couldn’t run 200 metres without vice-like chest pains – more Ventolin was the only way to ease it. The first run was almost half-a-mile in total, mostly walked. Over the weeks and months, this became a mile, then two miles, then three and always carrying my inhaler. 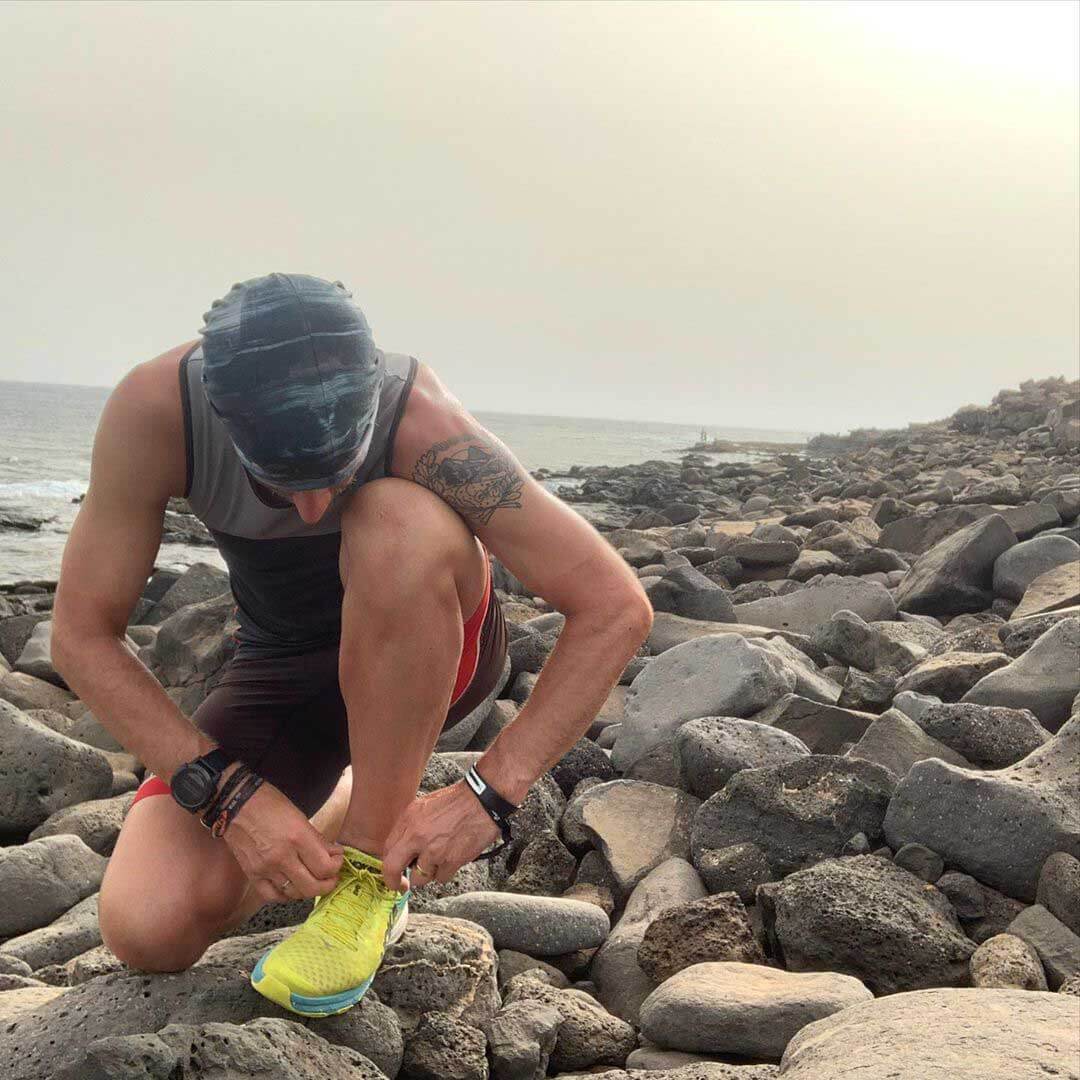 At this time, my dad recognised that we were thinking of starting a family and dropped a bombshell on me. He had a condition called Huntingdon’s disease, which would slowly but eventually take him from us. As a scientist, he had researched how to fight the condition and keeping fit and active could delay its onset, so he ran marathons.

As a hereditary, terminal condition, Huntington’s disease is passed on to one in every two children, so my two sisters and I were faced with the fact that out of the three of us, at least one would likely be carrying the faulty gene. If you carried it, it would be terminal. It didn’t kill you, but the weakened immune system, onset of pneumonia or uncontrolled shaking and swallowing difficulties would definitely do so.

My two older sisters and I had to undergo a series of psychological interviews before the blood test, to ensure we could deal with the possibility of a positive result. I wanted my two sisters to be tested first as I felt this gave them the best chance. One after the other, they revealed the fantastic news that they were both clear of the gene, which meant that the Huntington’s disease would progress no further down their family lines. 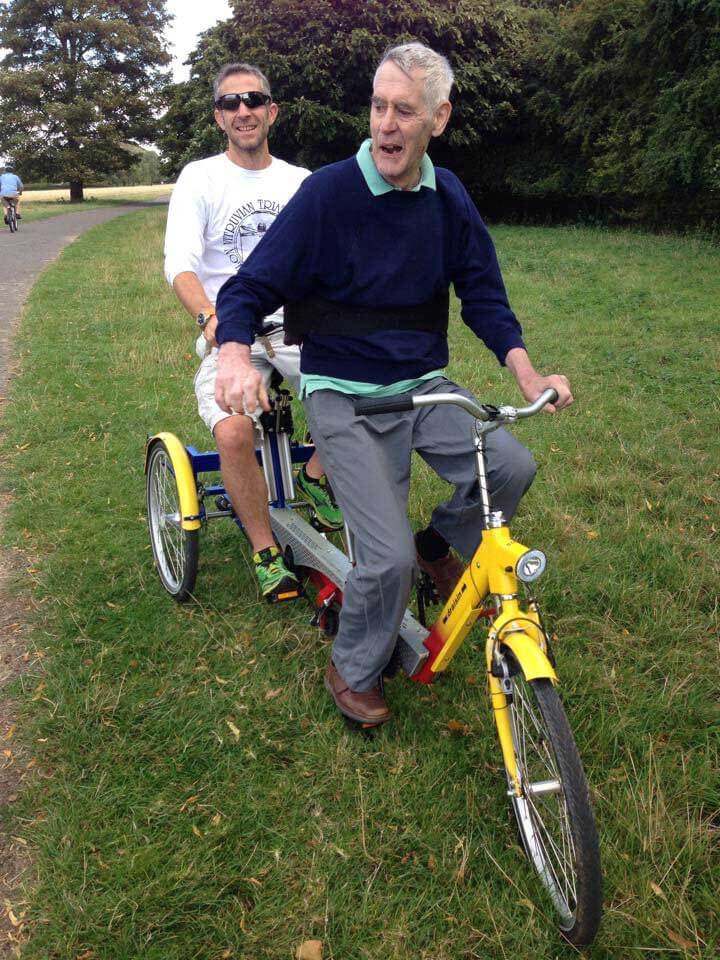 Thrilled to bits for them both and their families, I couldn’t help but think that if they were both clear, I was bound to test positive. Results day came and I was completely shocked and stunned to hear the news that I was also clear of the gene – Huntington’s disease in our family ended with my dad – although it would and did take him from us, it progressed no further – my dad had beaten the 1 in 2 odds and not passed it on to any of his three children.

It was 2002, a couple of years of running had passed by, my wife and I had a young son and I entered my first half marathon, with my dad. We ran together for 12 miles, at the back of the pack. My dad’s condition was taking its toll and he was wobbly, shaky and unsteady on his feet – we had a first aid car behind us the whole time, constantly pulling alongside to ask if we were OK.

By 10 miles, I was done. My longest distance, although running at a slow pace, had tired me out. My dad, although clearly showing signs of his advancing condition, was still so much fitter than me and together we got to the finish line. 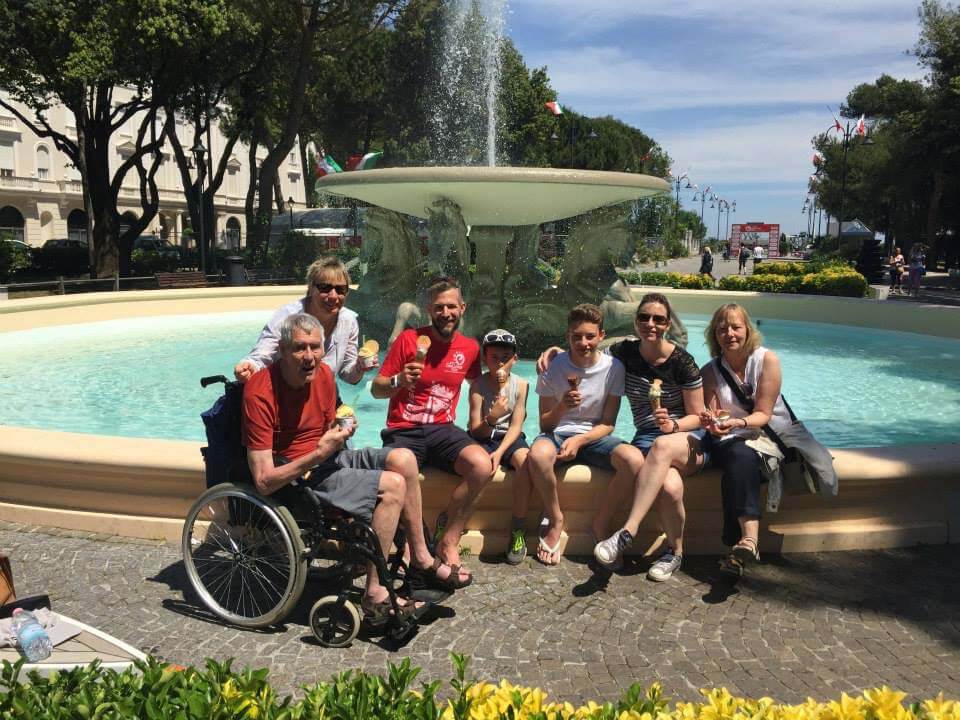 Five years later, I was running my first London Marathon, with my dad supporting me just past the halfway point. I stopped and hugged him and carried on in tears.  I was a 5-year non-smoker now but still asthmatic and carried my inhaler at all times. I finished in 5 hours 45 minutes, utterly destroyed and my dad told me with glee that I was two hours outside his 3:44 marathon PB! I told him I would beat his best time eventually!

It was 2014 and I had a few marathons under my belt now. I took to triathlon to help with injury prevention and cross training, making my way up to half-IRONMAN distance, where I qualified for Team GB and a place in the 2015 European Age Group Middle-Distance Championships in Italy. To have my dad and my family, including my wife and two boys, supporting me in Italy was amazing. My dad was in a wheelchair now but would come to support at every race he could. 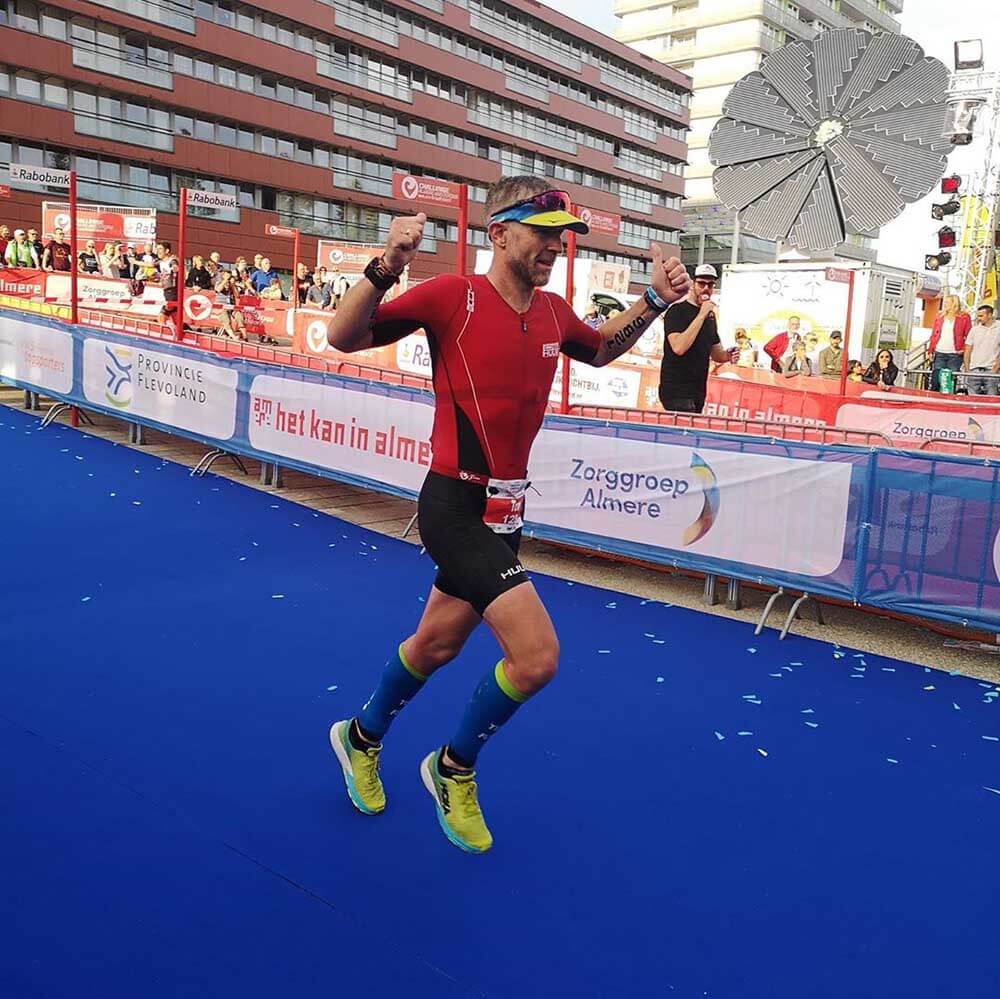 During the build up to this race, 10 weeks earlier, I had fallen off my bike on the ice and broken my back. Eight weeks in a back brace and with only two weeks to train for a half-IRONMAN distance race meant it wasn’t my finest performance. I finished in 5:49, but I couldn’t turn down the chance to race for Team GB, with my family, including my wheelchair-bound father, watching.

Fighting for every breath

It was now 2017 and my fifth London Marathon. I had already improved my PB to 3:28 and my dad wrote me a handwritten card detailing all his PBs, and said how proud he was of how I had turned my life around. He was still in a wheelchair, still fighting for every breath and fighting for every day.

My father came to watch me run in London again. We stayed in a hotel close by but he was taken ill the night before the marathon and had to be rushed to hospital. He didn’t get to see me run the next morning but I ran anyway, knowing it would have been what he wanted.

My dad died shortly afterwards, but he saved my life by motivating me to give up smoking, giving me goals, dreams, ambitions and he also saved our family by beating the odds of his condition and ridding our family of Huntingdon’s disease. The way he battled for every day of his life motivates and inspires me constantly, hence my Instagram name – @Inspired_runner_.